The first time I heard of Graham was way back in the day when Hello Sailor was creating a sensation in the same way as the Stones had a decade earlier in the old country. At that time I was living in the city famous for boasting a quarter capacity town hall for none other than the Beatles..again – more than a decade before. I wasn’t there when the Beatles played but I got to see Hello Sailor at the Shoreline all those years later and I have to say they were really something. They sounded like the real thing and had charisma long before Mark Todd had the horse. No pun intended.

Speaking of which – and at this time – I had a friend who called herself Issy and she was well acquainted with the “airline made of snow” to quote Steppenwolf. She told me that she had a mental condition which involved the loss of the will to work and that when she was tasting she and her boyfriend wouldn’t do anything at all and he would not say a word for days on end and it drove her crazy and that’s probably  why she came to live in the city that didn’t succumb to the Beatles….She took me to see Graham play …..

The Shoreline was absolutely packed and Brazier was bigger than Elvis and friend or no friend it was just impossible to get near him. So I didn’t get to meet  him until I opened for his band the Legionaires  at Vic  Orientation many years later and again at the Shoreline in the 80s and a Rock Festival in Te Anau  about a decade ago where I was greeted with conviviality and asked how I was to which I replied   “I’m a danger to shipping”….which was greeted with much hilarity and from that moment I think I became one of his many friends.

If I had the time and saw that the shop was open I visited him cause you just sensed it would not be open next time you passed by….and often it wasn’t and if you pointed this out to him he would always tell you he kept regular hours. At first he was a bit wary of me but in time it was possible to hang out and share a box of dumplings from San Bao next door and listen to his amazing stories few of which were about himself and his life in music but more about writers and his father and the way his father instilled into him the fact that there is an 8th deadly sin……Gossip. I was an offender and he made it perfectly clear that he was very put out. He left a message on my answerphone something like this

Come and see me…So I did and he forgave me and we in fact became closer friends after that. 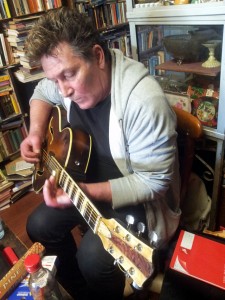 A few weeks ago I tried to buy a book off him. He was going to sell it and at the last moment decided instead to lend it to me. He told me that he NEVER lent books and that he wanted it back. I have it still.

At the funeral yesterday it was astonishing to discover that in the early days of his songwriting career Graham liked to do a 20k run before picking up his guitar. He loved nature and walking on the beach and in the hills and believed that if he touched alcohol he wouldn’t be able to stop .

His son spoke of how Graham was not afraid of moving on. “Son…don’t be scared of death. Don’t worry. It’s beautiful and peaceful without pain. Like I’m floating. It’s real nice”, and he didn’t want to come back.

He is happy and he told us not to worry so lets put  the whiskey bottle back in the box marked “props”. Graham don’t need it anymore.

* Eds note: Gossip is the devils radio is a George Harrison song off 1987 album Cloud 9.

5 thoughts on “Graham Brazier – a Danger to Shipping”