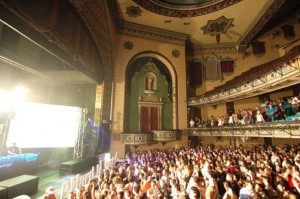 The good news is that the St James Auckland is open again.
The bad news is it closes in March 2016 for three years while a 39 story apartment block gets built next to it.

That gives us a little window to do shows there. Go have a look. The doors are open daily and you are invited to walk around (and a cafe has setup.)

“How about that then?”
Reminds me of when my son was heading for the grand old age of one and he was still not talking. Then all of a sudden he blurts out in perfect English

“How about that then”.

DYLAN THOMAS IN AMERICA
Dylan called his fans ardents .
He was a poet with the following of an A list rock star
He was based in a tiny extremely conservative village in Wales..
When invited to tour the US his wife encouraged him to court the “gullible Americans” and bring home some much needed money
At home when not writing he liked to loll around in the bath sucking on boiled sweets or hang out with his buddies sinking vast amounts of alcohol

Imagine the contrast of touring America , being hailed as a genius and performing in the best places well paid and surrounded by worshipful beautiful people.
You would think that this would be a good time to let the old habits go ,wake up and smell the coffee and embrace a rosy future
Nah!
He preferred instead to drink whenever possible, generally squander all his money and get involved in absurd romances
He returned home penniless
O dear.
Strange how many people follow the same pattern in the face of success
Why so many artists foul their own nests when presented with the “big time”?
I guess it just don’t seem real
Cause in fact it isn’t
It crumbles in the first little huff and puff

THE COST OF ART
My father was a surgeon and in his spare time an abstract painter
He considered himself a painter first and a surgeon second
Its an expensive career. Quality art materials cost a FORTUNE
He only got the best.
He was tortured by doubt and worry but there was no doubt he had something.
I own one oil of his and the Eastern Southland Gallery in Gore has most of the rest of his work.
A large body of his work was destroyed in a fire recently.
Thousands of hours work and HUGE expense and intense application all up in smoke
The record of most of his work is lost forever

This guy comes up to me and gives me a 50 Euro note.
He invited me to join him and his friends for dinner in a place close by
When I got there he told me to put my amp on the bar and start playing
I played for hours and people streamed thru the place
The people he introduced me to were obviously onto it and successful in their various fields
Who was this guy and how did he have the authority to take the place over?
The staff didn’t bat an eyelid about me playing in this place that had never had live music before

At the end of this extraordinary night we had a chat and I told these guys my big plan for “making it” in Ireland
They just stared at me like I was a total imbecile “You don’t need to talk shit to us” they said
And followed up with the best advice ever.
“Play!”
“Just play like a bastard”
“Forget about selling anything> Just play!”

Voila!
That’s it folks
The greatest thing a musician can do is just play sing write
Nothing can replace the live here and now
Never mind the bollocks
Just play!

4 thoughts on “How About That Then”