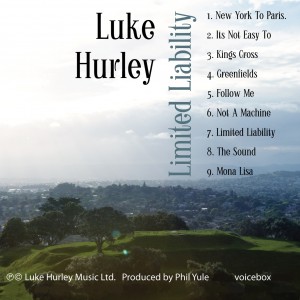 This 9 song live album was recorded at Ponsonby Baptist Church in ’07. Phil Yule of Voicebox did the honours.

Update: No longer on iTunes.

All songs written and performed by Luke Hurley
Recorded/produced by Phil Yule :www.voicebox.co.nz

The lyrics for Limited Liability (Live) are available on pdf here. Listen to the album below. 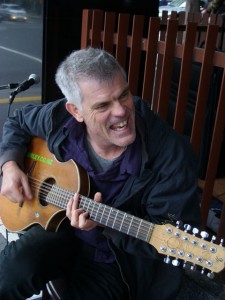 Foursquare check-ins are a way to find new places and people with a smart phone. These phones have location services so that they can “look” around an area and help you spot special deals.

We thought there is no reason that Luke couldn’t be on there when he is busking outside Starbucks on the corner of Queen St (220) and Victoria St East in Auckland.

His 4 Square location is here

Please check in, say hi and let your friends on Facebook and Twitter know when he is around. Also his birthday is on 31st August.

Feel free to leave a comment or “todo” on Foursquare.

Here are some thoughts about my song “The Sound.”

These papers proved the existence of the atom, introduced the theory of relativity, and described quantum mechanics.

His equations for relativity indicated that the universe was expanding. This bothered him, because if it was expanding, it must have had a beginning and a beginner.

Since neither of these appealed to him, Einstein introduced a ‘fudge factor’ that ensured a ‘steady state’ universe,  one that had no beginning or end.

But in 1929, Edwin Hubble showed that the furthest galaxies were fleeing away from each other, just as the Big Bang model predicted. So in 1931, Einstein embraced what would later be known as the Big Bang theory, saying,

“This is the most beautiful and satisfactory explanation of creation to which I have ever listened.”

He referred to the ‘fudge factor’ to achieve a steady-state universe as the biggest blunder of his career.

Einstein’s theories have been thoroughly proved and verified by experiments and measurements. But there’s an even more important implication of Einstein’s discovery.

Not only does the universe have a beginning, but time itself, our own dimension of cause and effect, began with the Big Bang.

That’s right — time itself does not exist before then. The very line of time begins with that creation event. Matter, energy, time and space were created in an instant by an intelligence outside of space and time.

About this intelligence, Albert Einstein wrote in his book “The World As I See It” that the harmony of natural law

“Reveals an intelligence of such superiority that, compared with it, all the systematic thinking and acting of human beings is an utterly insignificant reflection.”

He went on to write,

“Everyone who is seriously involved in the pursuit of science becomes convinced that a spirit is manifest in the laws of the Universe– a spirit vastly superior to that of man, and one in the face of which we with our modest powers must feel humble.”

The Sound – Lyrics and (See video The Sound on YouTube)

Here is a Random comment from PsyDivison (6 months ago)

“I just love this man!
On my NZ journey i met him twice performing this song on queen st cnr wellesly rd, as kind of an extended instrumental version, that would last for hours and hours.

It was a sunny day and i couldn’t help but sing and hum along with the overtones, every time the deep bass hit me it sent me shivers of joy down my spine and simply hypnotized me back then!

In fact I never thought to be able to hear this song ever again, so thanks a million times for posting, mate!”

To read more comments go to youtube or more LH searches here
Thanks to Simon Raby for the extraordinary cinematography. Editor: Annina Zamani