Was invited to play in Paris. A few gigs came of this including one on a boat (there is nothing in the world quite like messing about in boats)

It was great to see my friends from Auckland- Madelaine and Aaron- and be able to invite them up to the apartment that I was a guest in. A perfect little apartment right in the heart of Paris.

My hosts had given me the most ideal conditions like something out of a movie….being met at the station and delivered there in a Porsche was just one of the things that went with this dream visit.

Cannot claim to have given much in return and certainly knew no way to be able to live up to the circumstances I found myself in.

I stayed up very late and slept late and explored the vicinity with the wide eyed wonder of a child.

The first thing that I noticed was Notre Dame…..a building I have always loved but this time it was real!

What a miracle of architecture. It took a century to build.

Nowadays it’s more of a tourist trap than a building within which to reverence the creator. …

Such kind of worship has given way to a worship of another kind.  No priests in evidence other than priests of commerce.

There is a whole adjacent block dedicated to selling junk to tourists and even a shop inside the church itself.  How did this happen and why do we let it happen? Commerce don’t belong here! It was a holy place now forced to exist for tourism.

It was a church now its a shop. Its surreal. It’s like when a beautiful woman goes on the game and her friends don’t pass any comment.

How DO Christians feel about their churches being offered up to this desperate game?

In late November and early December Luke played gigs at number of locations including Paris, London and Gothenburg  as well as other parts of England.

Here are some notes from those shows.

PARIS
Paris is like a theme park full of the expectations a tourist would
have of it.  At Notre Dame there is a strange interplay between the “merchants” and the tourists. 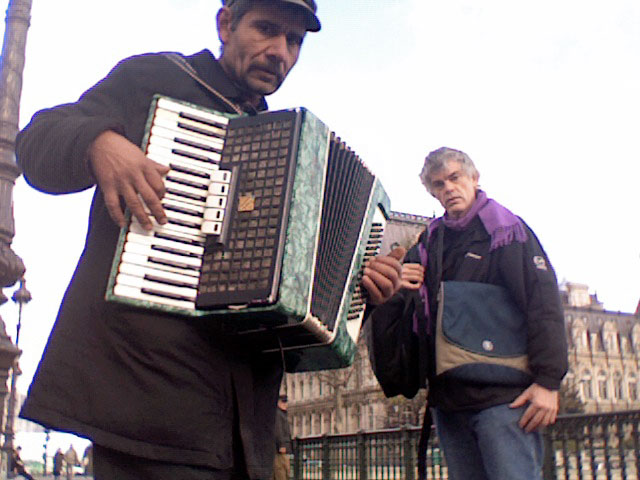 No street players in evidence but no shortage of rich beggars. Much intolerance for one and total acceptance of the other. In the vicinity kitsch shops and very expensive cafes abound. A cup of coffee will set you back ten bucks kiwi.

Saint Michel
Played near the fountain and inevitably got closed down. Strange habit of mine playing anywhere at anytime for anyone who will listen.  I call this practice “meet the police”.

Strange how playing gentle music to people is not tolerated anywhere in the world!

The best Paris gig was at the GREEN LINNET.  Check it out if you are a musician. The owner has a very encouraging attitude and easy to work with.

He told me that Rory Gallagher was obsessive about guitar There was nothing else in his life Hope I don’t get like that Love guitar but its not the center of my life.

I guess the center for me is more about people than music. People are endlessly fascinating.

LONDON
A few days prior to my show there it looked like we would have to cancel. There was a concern that I was not going to draw a crowd!

It went ahead anyway and the result was contrary to expectations.  It was a full house. A great atmosphere in that place.  People I had not seen for decades turned up.

Along with a lot of Londoners who were suitably impressed. Can’t help being a bit proud of the way it turned out.

“Just heard Luke at the Alma. I was worried that nostalgia would have tinted my rosy coloured memories of Luke but he was great! Better than great and better than I remembered.”

Note: If you were lucky enough to see / hear Luke In Paris, London or Gothenburg please write your comments below or send us a review.

Here are some shots taken around Paris in late November 2008 by me.