The next Auckland concert coming up is at Lot23 Studio. This is a great venue which includes a cafe, a bar, a gallery, a performance space and sound stage. This will be a showcase performance and the plan is to film the show. Also performing will be MW (Marcus) Sellwood and Duncan Gillies.

The doors open at 6pm for Tapas & Drinks. EFTPOS is available.  Tickets will be $25 each with a free (LH) album download of your choice to all of those who come along. You will have to be there to get the bonus album. This is a cosy space so don’t leave it too late to book. We will have door sales if space is available.

\\\\ LOT23 IS A CREATIVE HUB FOR ARTISTS, MUSICIANS, FILM MAKERS & PERFORMERS OF ALL KINDS. IT COMPRISES A MEDIA HOUSE, STUDIO, THEATRE, GALLERY, CAFE & BAR, AND HOSTS A WIDE MIX OF EVENTS \\\\

The photo below is from another gig at Lot 23 and gives you an idea of the space. 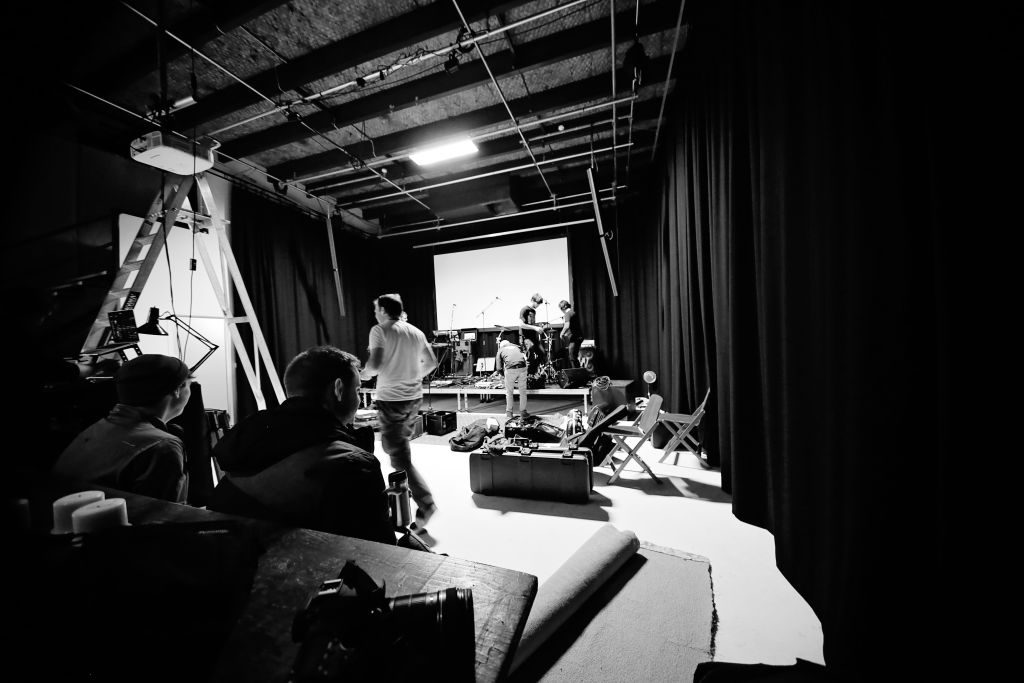 $25 a ticket  P.S click on orange buttons below to buy. You will be emailed directly by secure PayPal. Tickets will also be for sale on the door – bring cash. Doors open at 6pm.

Wondering what Lot 23 map looks like? Here is a clip from the mural making some time back to give you an idea. Also if you remember the cafe Brazil – Lot23 is where that unique coffee machine went to. That is worth a trip by itself. More history on Lot23 over here.

“The 1962 San Marco lever coffee machine was bought from the owners of the old Brazil cafe on K Rd. It uses only manual extraction techniques, meaning there are none of the fancy automated gizmos seen on modern machines. It truly is a piece of art in its own right.”

The next Luke & Friends concert show will be a convivial mix of styles from me and my bros.. Duncan Gillies & Angel Gordon. Marcus Sellwood. Basant & The Professor.

The sound is taken care of by Paul Crowther -Split Enz original drummer. We will probably record some of the show. There will be good food on offer and the venue is close to a number of famous watering holes being situated on the edge of K Rd and Ponsonby Rd so you can always come and go as you fancy. Runsheet will be to schedule that will be chalked up for all to see.

This is the 4th show of its kind and the feedback has been promising. Its gonna be a good one and nowhere could you get this standard and variety for so little outlay. If you can make it pls come or sponsor someone else to come. It costs a lot to stage this event and we don’t want to carry a deficit. So far so good so lets do it again except this time to a full house!

Saw this at the Capitol cinema on Dominion Rd if you are in Auckland. It’s a clever movie. It’s great how Gervais further develops a character famous as a loser in a high profile doco and gives him the ambition to risk his pension fund on the road with a band of paid friends. Ironically the band is called ‘Foregone Conclusion’

There is a beautiful twist in the way this totally awkward cringe merchant – David (everyone knows a loser when they see one) Brent wins the natural affection of the friends he previously had to buy.

The love shines thru. He gets a glimpse of insight into his own behaviour and finds love back in the world he was trying to escape. A unique tragic-comic resolution – you gotta see it!

Please use the buttons below for Oct 22 concert tickets

$20 a ticko et  P.S click on orange buttons below to buy shopping cart. You will be emailed directly by secure PayPal. Tickets will also be for sale on the door – bring cash.

The concert venue is 8 Gundry St, Hall entrance off Abbey St – see photo below. In some places it might be called ‘Old Folks Association Hall’ or Coronation Hall.

Poster: Plus large .PDF version below 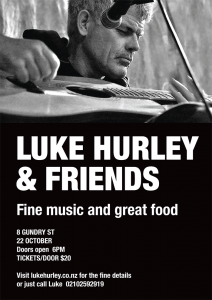 i often feel kinda low biorhythmically especiaĺly earlier in the day. By the time the office workers are heading home i start to feel like starting my real “work” in fact back in my youth i could work all night on a song and finish by dawn and feel like a king.

The rest of my life was a trainwreck though ….but at the time i didn’t realise how good some of my writing was. I underestimated the worth of my material. Perhaps that was the secret.

Self Doubt can be a spur.
—-
Concert Update: for tomorrow 6th August

So; Turn your pc off. Watch Netflix some other time. Bring a friend if you have one and if you don’t come along and make new friends at the concert.

Here is a taster from Duncan & Angel

—–
But……there is one area where self doubt is not required…when reaching out to a long lost buddy. And i can illustrate it with this story

Long ago i went to a Berkley School of jazz course being held in Wellington. John Schofield was one of the guitar teachers. Love his playing still. Check him out.

At this course i also met Jeff Dickie from Dunedin. He told me that being a pro wasn’t for him and he preferred to look elsewhere for his livelihood. He went on to achieve great things both in music and other pursuits and for decades i have often reflected upon what he told me the best part of four decades ago. He is a great chap and i always felt in awe of him

I assumed he wouldn’t want to hear from me but for once i decided to give my self doubt a break.

I found his number and called and naturally expected him to be kinda distant and perplexed as to why i should call. His response was the reverse. He was very pleased to hear from me and filled me in on what he did immediately after the Berkley course. He also offered to play on my next recording session ….the last thing i expected! He is kindness itself.

“I went to the USA in 1981 to buy a Mesa Boogie amplifier. I read about them and couldn’t sleep until I had one. I went through epic iIiad sagas to get my hands on one….. the factory couldn’t supply me with one as the waiting list had a who’s who of world famous guitarists waiting.. Including Clapton, Townsend, BB King etc etc. I then spied what I wanted in a free San Francisco newspaper and rushed off to buy it. When I returned to my hotel I turned on the TV to find a bloke had sat down on the same park bench where I had read the paper an hour before and was shot dead by an unknown assailant! How did I digress to here? A week later I was traveling through the Rockies near Denver when the Greyline bus stopped at a small mountain village in the middle of nowhere. Pete Peterson, the red-neck bus driver suggested we try the one local bar for a beer and a sandwich. There we were greeted by John Hinckley Junior, who about a week later shot President Ronnie Reagan! This is absolutely true. “ 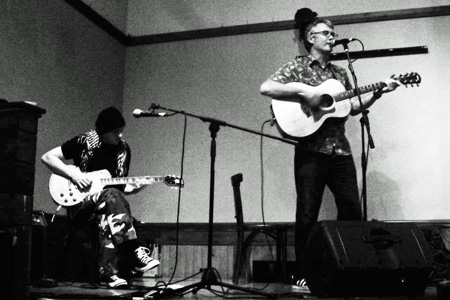 By the way the show on Saturday. Let me explain

I will be playing short sets early on and a long set to finish the show. It will be fun please come and or sponsor the event.

Thank you Alan for supporting the BFM campaign