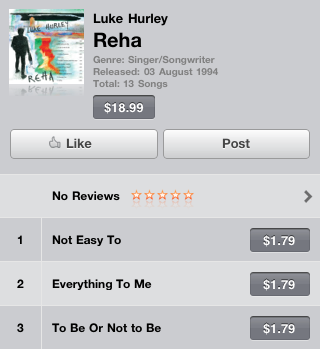 Originally released in 1994 Reha was produced by Norwegian  Jan Bille. Players are

All songs  by Luke Hurley

The word Reha means the realisation that we have eternal life

Who would not want to know this state of being? Sometimes I think we all have it. Its like eternity is planted in our hearts.

I never had the resources to promote this album.  It’s a bit of a sleeper. It doesn’t just have my  sound. It also has Jan’s signature. His production work is unique. I hope to work with him again soon.

Without Jann Hurley’s help Reha would never have materialised. She suggested I work with Jan Bille & made it possible to go down to Christchurch . Everything To Me was written for her

Not Easy To We think we understand things. We know very little.Life’s a miracle and a mystery!

Duvalier about the Haitian dictator was a memorable song from this album.

“Duvalier .. Duvalier- you took the money and you ran away.”

The new artwork is by  Elena Panaita  based on a  photo by Dave Mann .